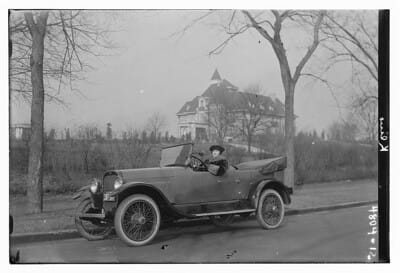 The Kline Kar was Richmond’s answer to an industry that hadn’t yet begun to develop.

If you ask around, you won’t find too many people who know about James Kline. James was a bicycle maker out of Richmond. His fascination with automobiles took off when he first witnessed what was known as a “Locomobile”. From then on, he decided to take part in the new and burgeoning automobile industry.

After his first experience with the “Locomobile”, he purchased one. Quickly after that, he started to make improvements to it. Once the initial set up was completed, he went on to find partners. By 1905 the partnership had developed vehicles that could compete in the industry. The Kline Kar had been developed and marketed as a high-end luxury vehicle.

The Kline Corporation had developed roughly 2,500 automobiles by the time they decided to work in performance racing. By this time, Richmond was holding its first automotive race. It was the state fair (taking place right across the street from the Kline Manufacturing plant) that would hold the first-ever race. Unfortunately for the emerging racing manufacturer, their first race was a failure. The car they chose to race lost a tire and went through a fence. Once the driver was able to get the car out of the dirt, change the tire, and finish, they had been 3rd place.

By the start of the 1920’s the idea of slowly manufactured high-end vehicles was on the decline. With the now established automotive industry and assembly-line manufacturing, Ford had everything it needed to dominate the industry. With the assembly line came the cut in the cost of manufacturing. The automobile became the car of the people and not just for the wealthy. Instead of trying to compete with a higher volume and more cost-effective vehicle, Kline decided to close the shop. In his closing statements to his work in the automotive industry, James Kline said: “I would rather see my children dead than prostituted to cheapness and inferior workmanship.”

Honda CR-V Of 2023 Sure To Be A Refreshed Classic