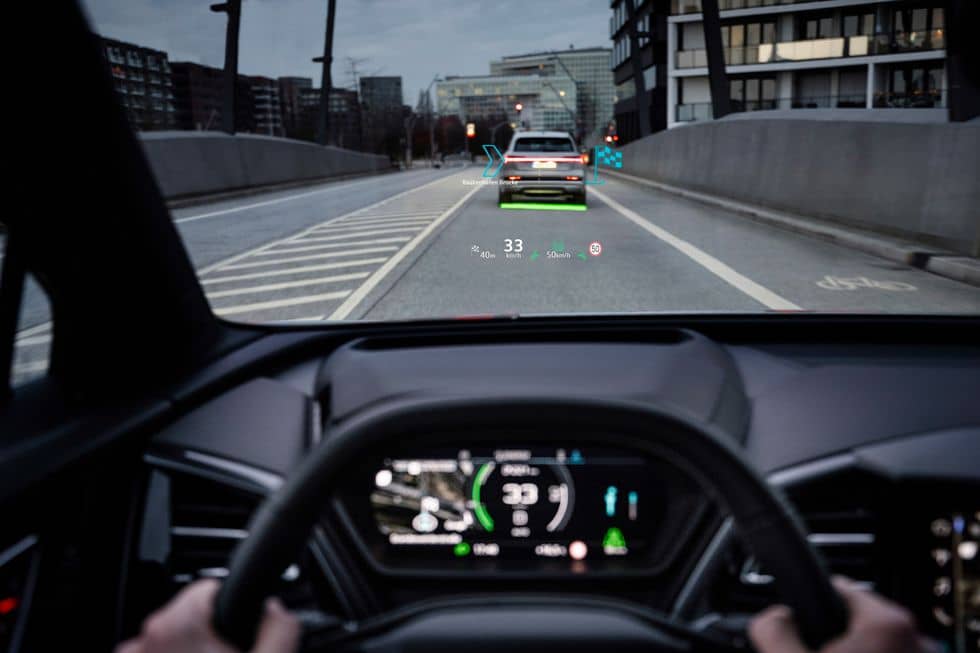 Audi is starting to detail more information about their new and improved 2022 Q4 e-tron compact electric SUV… Thing! Which is set to reveal in April.

What’s the buzz about for Audi?

Well, this Q4 e-tron is offering augmented-reality with a heads-up display, as well as cargo space behind the front seats and a variety of sustainable materials to choose from for the interior. Furthermore, the Q4 e-tron is likely to enter production by the end of this year and may very well land in showrooms by early 2022.

It happens to also be a model that is boasting a never before seen augmented-reality Heads Up Display (HUD) system. In it, there are arrows that can assist with navigation. The modus operandi for the 2022 Q4 e-tron is showing itself off in camo-design. Furthermore, with all the orange and white, it’s pretty dang obvious how close the design resembles the concept from back in 2019.

How do I mean? Well, Audi is using an HUD that will superimpose navigational elements to the windshield. Info about more intersections that are to be approaching you may be shown in projections along with a floating arrow. This helps show route actions as the driver should be making them. It would especially be of great use in roundabouts and complex intersections with four plus roads.

With the back seats down, the Q4 e-tron has about 52.6 cubic feet of space. With them up? Only 18.4. Pricing and range information isn’t likely to be sharable yet. But the nearest competitor is the 2021 Volvo XC40 Recharge. Whereas the Audi is 6.5 inches longer.

As of recent, there are still no specifics about how the motor or battery specs would be affected. That information is being saved for the reveal of the vehicle in the following months to come. Audi Q4 e-tron is likely to start at a price of $55,000 in case you were curious.